Junsui is the Asian inspired offering at the Burj Al Arab with Japanese, Chinese, Thai, Indonesian and Korean dishes on offer served across 8 live cooking stations. It’s a self service format with some dishes ordered from the live cooking stations and delivered to your table and others available to help yourself to. The costs is AED 550 per head for food which is served between 18.00 – 23.30pm each night. There’s also breakfast and lunch options too.

The entrance to the Burj Al Arab alone with a Ferrari casually parked outside is impressive. And once inside it’s dazzling. Ok, it’s not to everyone’s taste – it’s gold and bold with splashes of colour (even bordering on garish in parts), but there’s no denying it’s opulence and one of a kind interior. Pass the dancing fountains in the lobby and array of designer shops (it’s probably best you don’t go in), and take the lift to lower ground where Junsui is located. 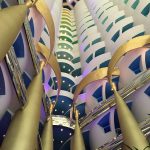 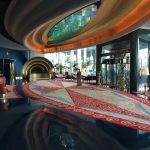 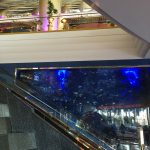 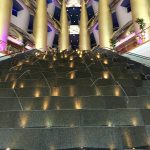 In contrast to the bright colours and gold pillars above, Junsui pulls off classy opulence. We were warmly welcomed and taken to the lounge area which is very plush with cream sofas and chairs and then there’s the ceiling…we were told by the waitress that it’s the most expensive ceiling in Dubai and I can see why. Decorated in Swarovski crystals it’s pretty impressive. Only the ceiling in the Emirates Palace in Abu Dhabi steals it’s crown in terms of being the most expensive ceiling in the UAE so second place behind that is not too bad. The restaurant itself is separated into a number of seating areas opposite live cooking stations and is relatively relaxed in comparison to the entrance but is still a lovely setting. 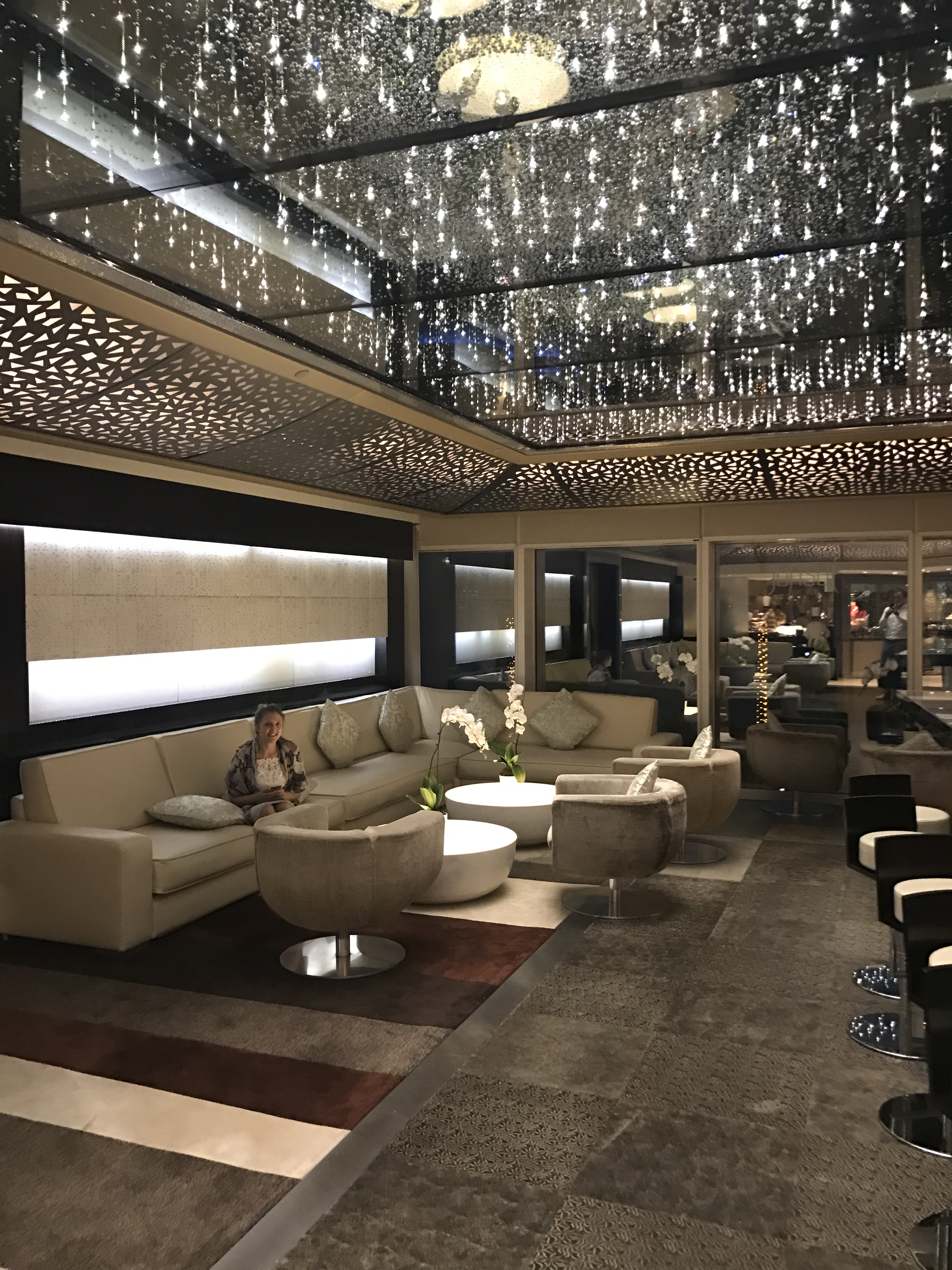 The Lounge in Junsui and THAT ceiling 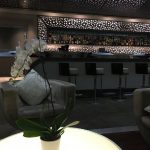 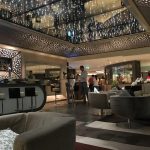 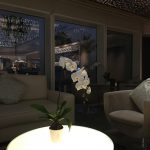 We were focusing on the food on this occasion after having drinks in the bar upstairs (Gold on 27 – full review on the blog), and there was a lot of food to focus on. The restaurant is split up by cuisine from an area dedicated to Sushi through to your Thai dishes such as Pad Thai. There’s Teppanyaki, Peking duck, Dim Sum buns and that’s only naming a few! Each station is manned by a chef who will cook food to order and then certain dishes that are freshly prepared are brought over to your table. 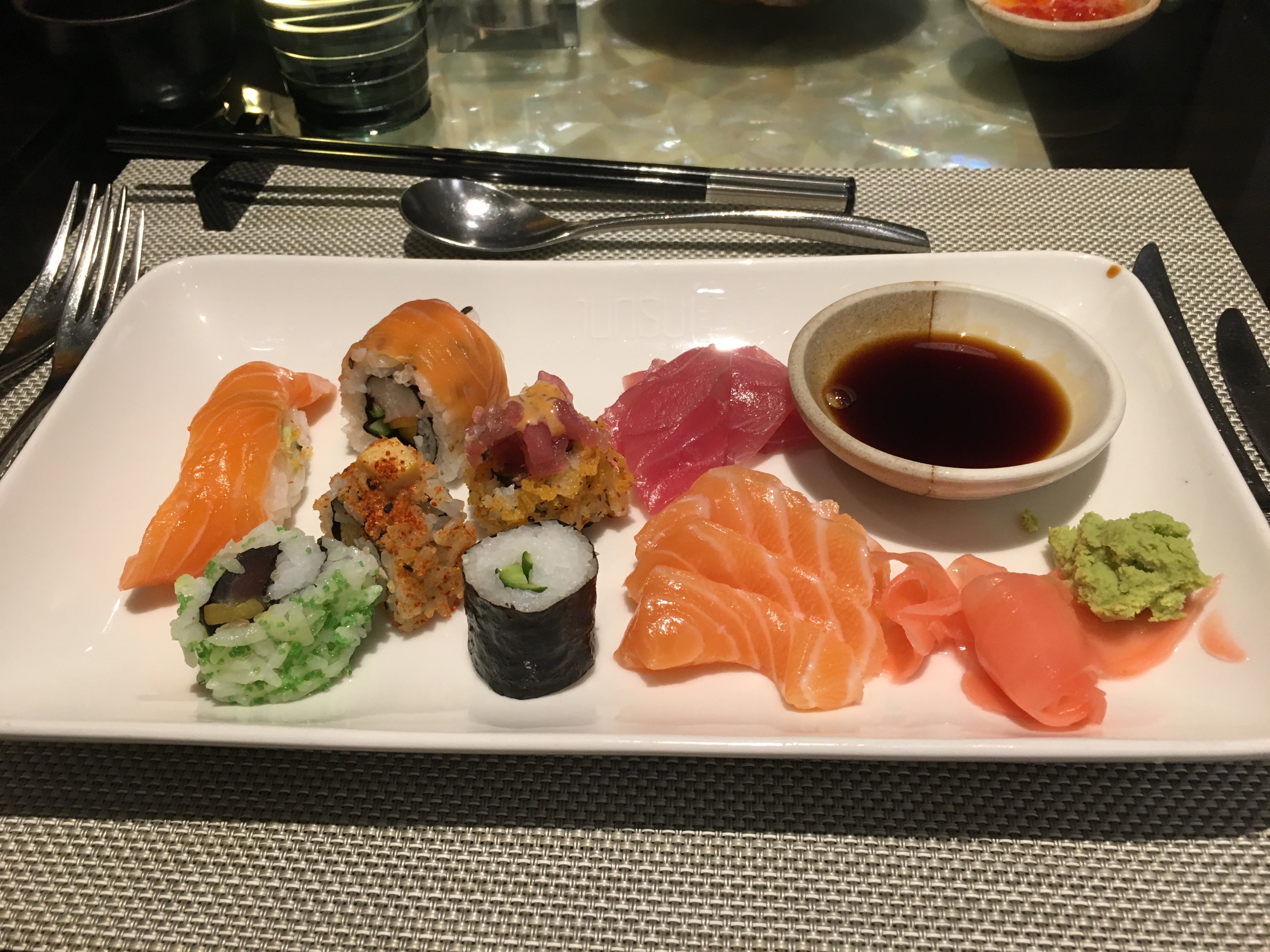 A few of the options from the Sushi counter 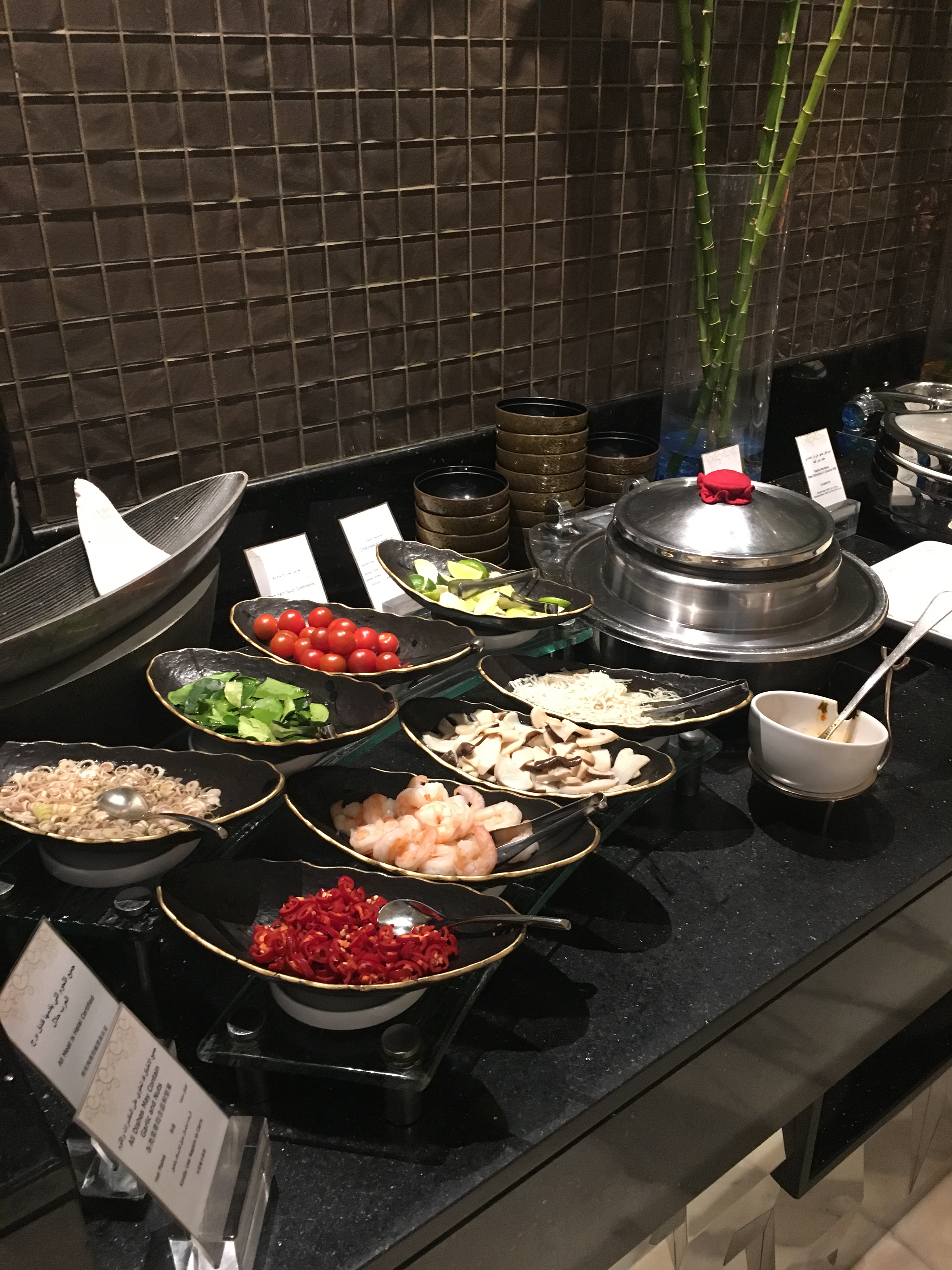 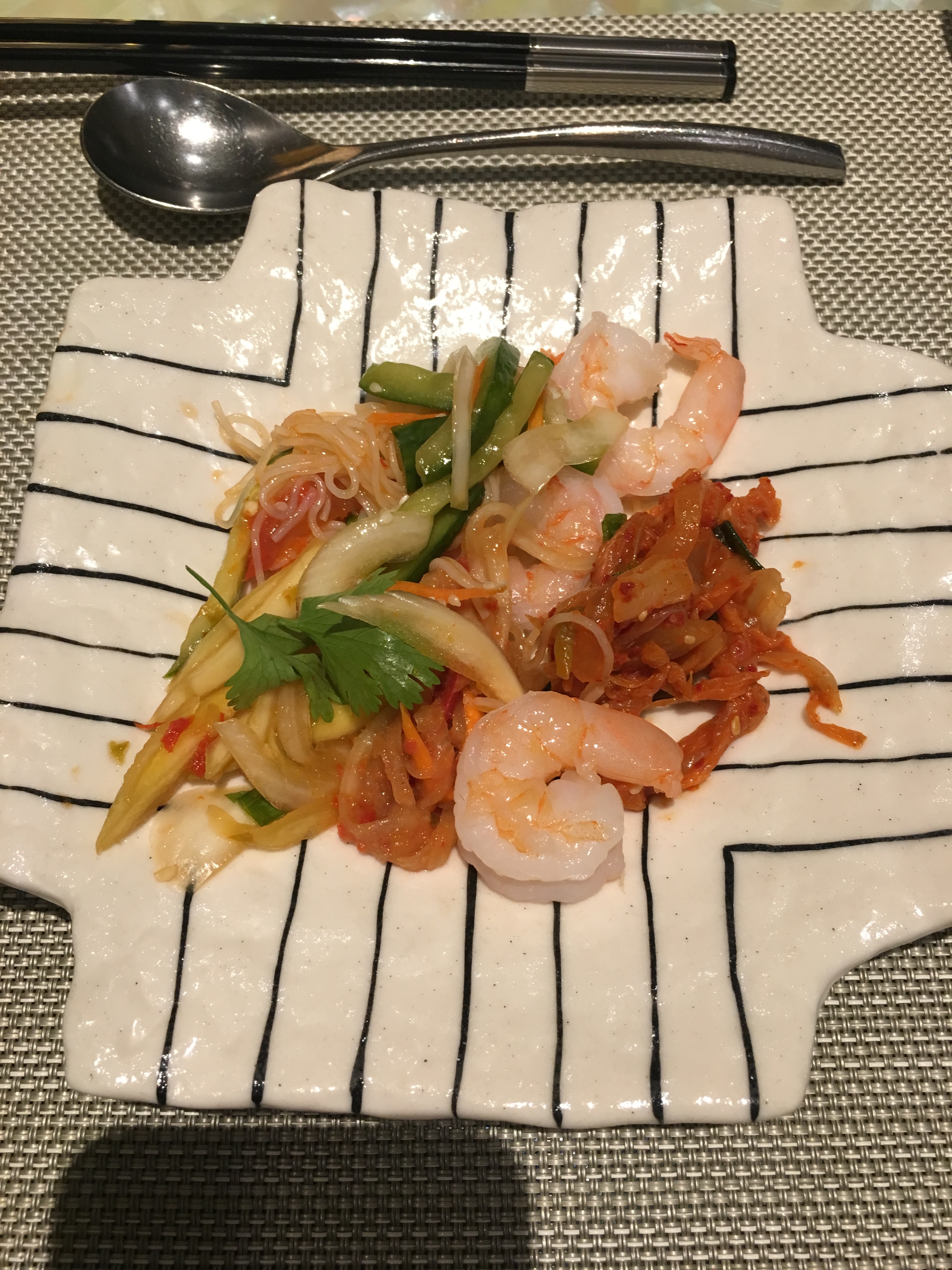 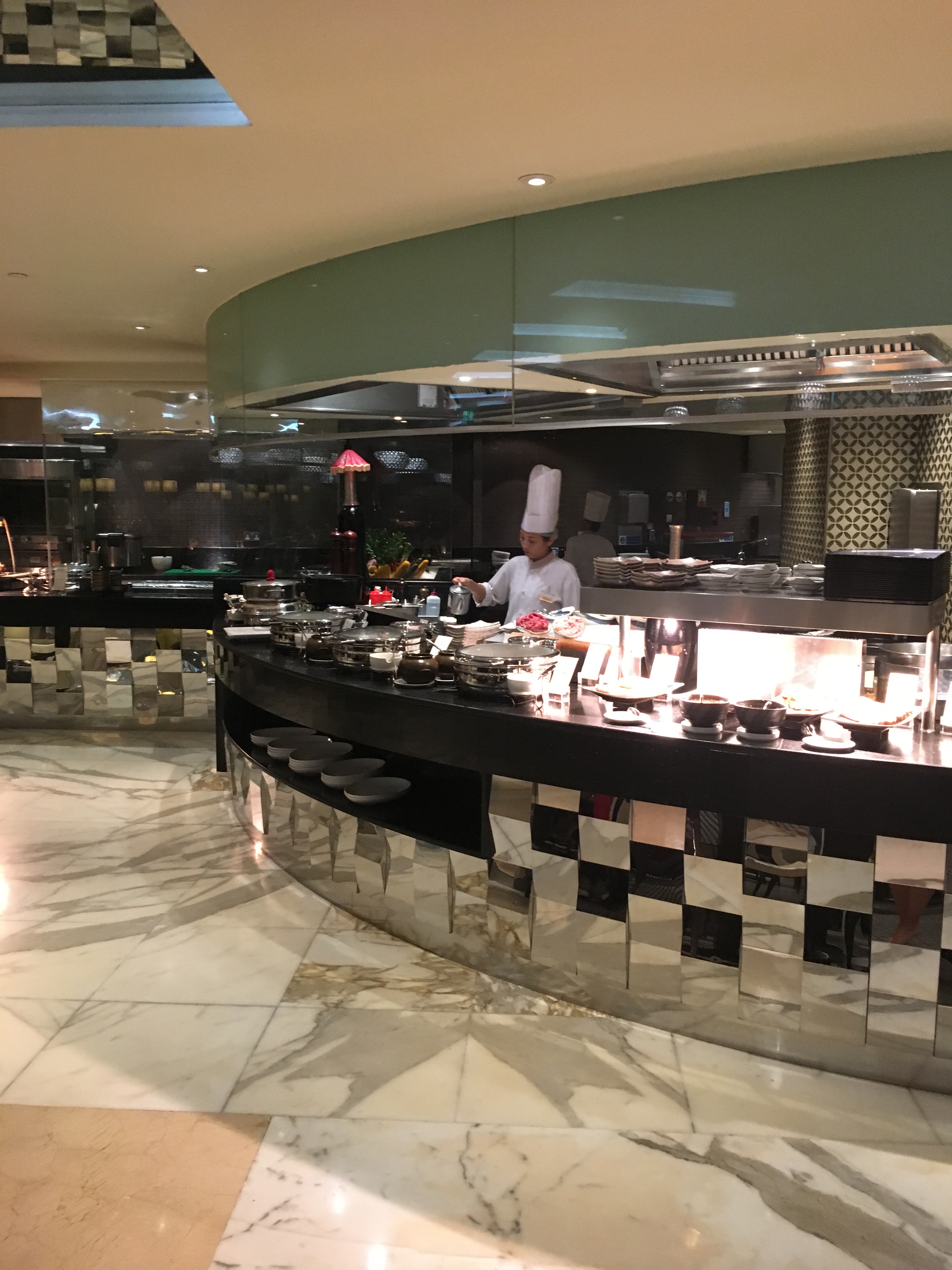 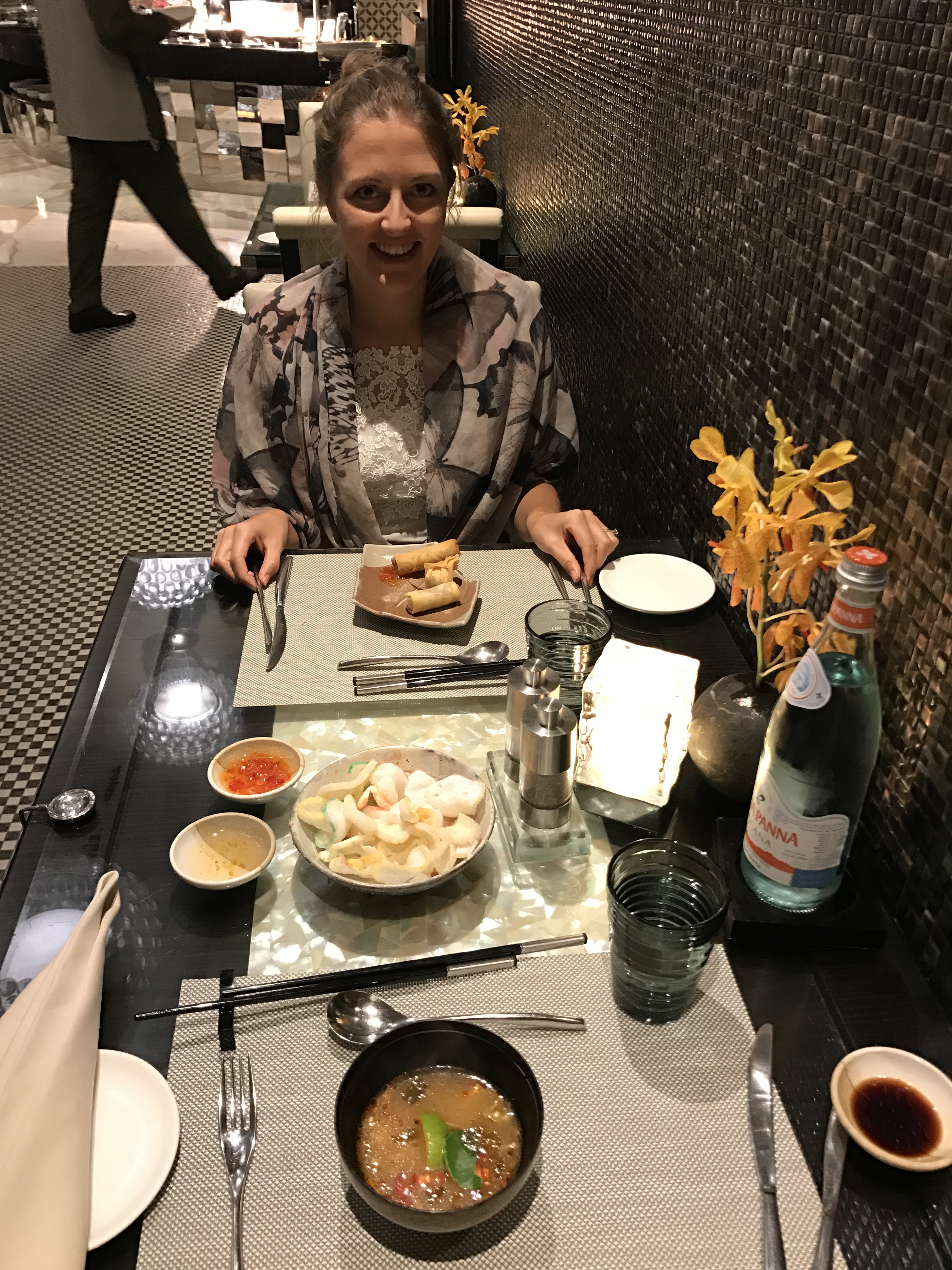 The staff really make Junsui – from the expertise and passion of each chef for the dish they are preparing, through to the waiting on staff who really do go the extra mile to help. We even got a huge chocolate filled crepe to finish that wasn’t even on the menu. We didn’t ask for it but the waiter suggested we try one – it did push us over the edge in terms of waistlines but we obviously managed to squeeze it in. 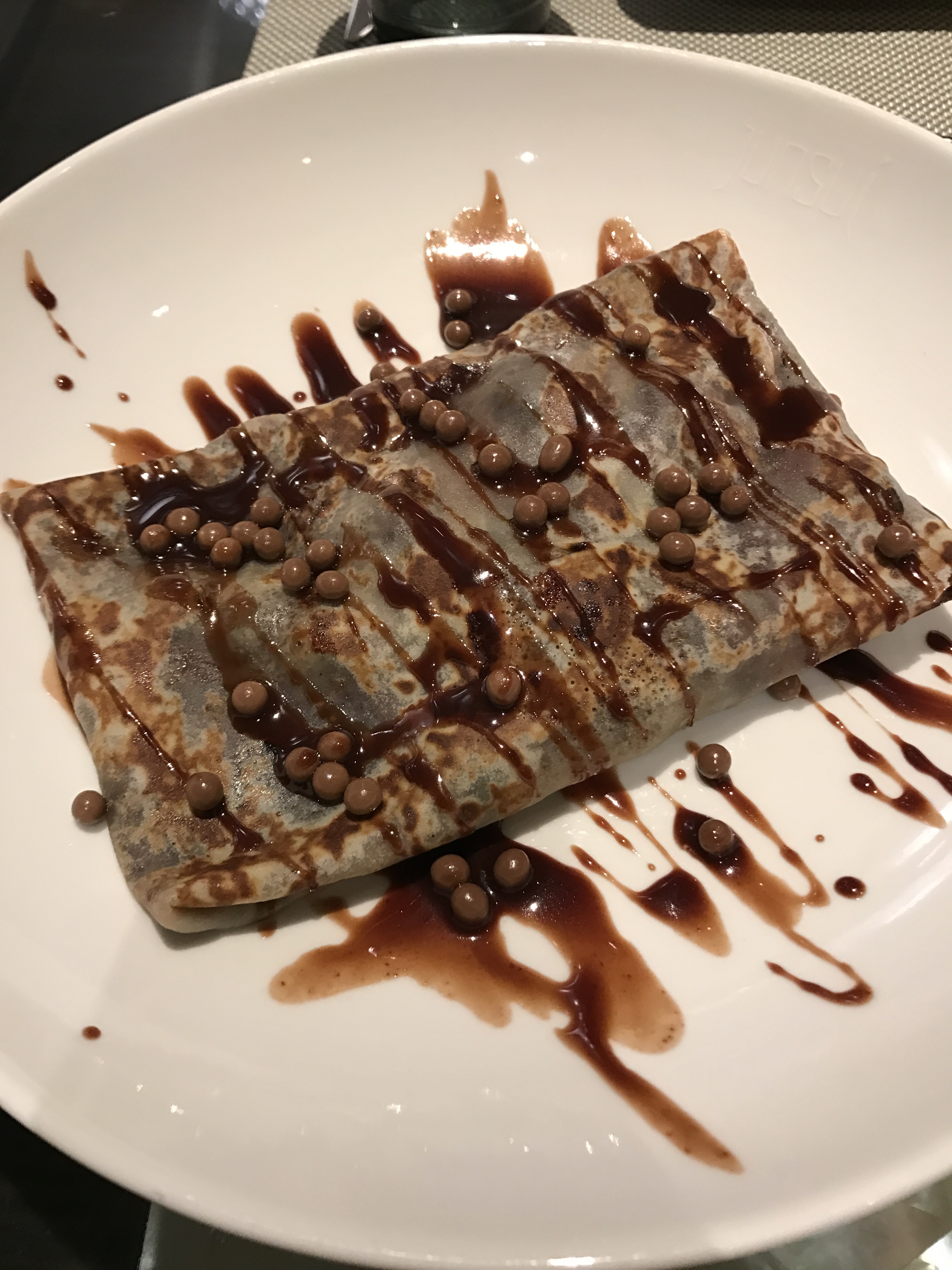 The crepe to finish

There’s a small selection of other desserts which is probably a good thing as focus is most certainly on the starters and mains here, although you must leave room for the ice cream and sorbet. I’d really recommend the banana ice cream and the lemon and exotic fruit sorbet – some of the best I’ve tasted. Other highlights from the main event include the tom yum soup, squid teppanyaki (although portions for this are huge!!) and the Thai salad selection. I treated it a bit like a brunch and tried my best to sample a bit of everything which was too ambitious and left me feeling very full. But you can treat it as you want, some people literally headed in for a casual quick bite to eat (much to my astonishment – I couldn’t have left without at least attempting to try everything). 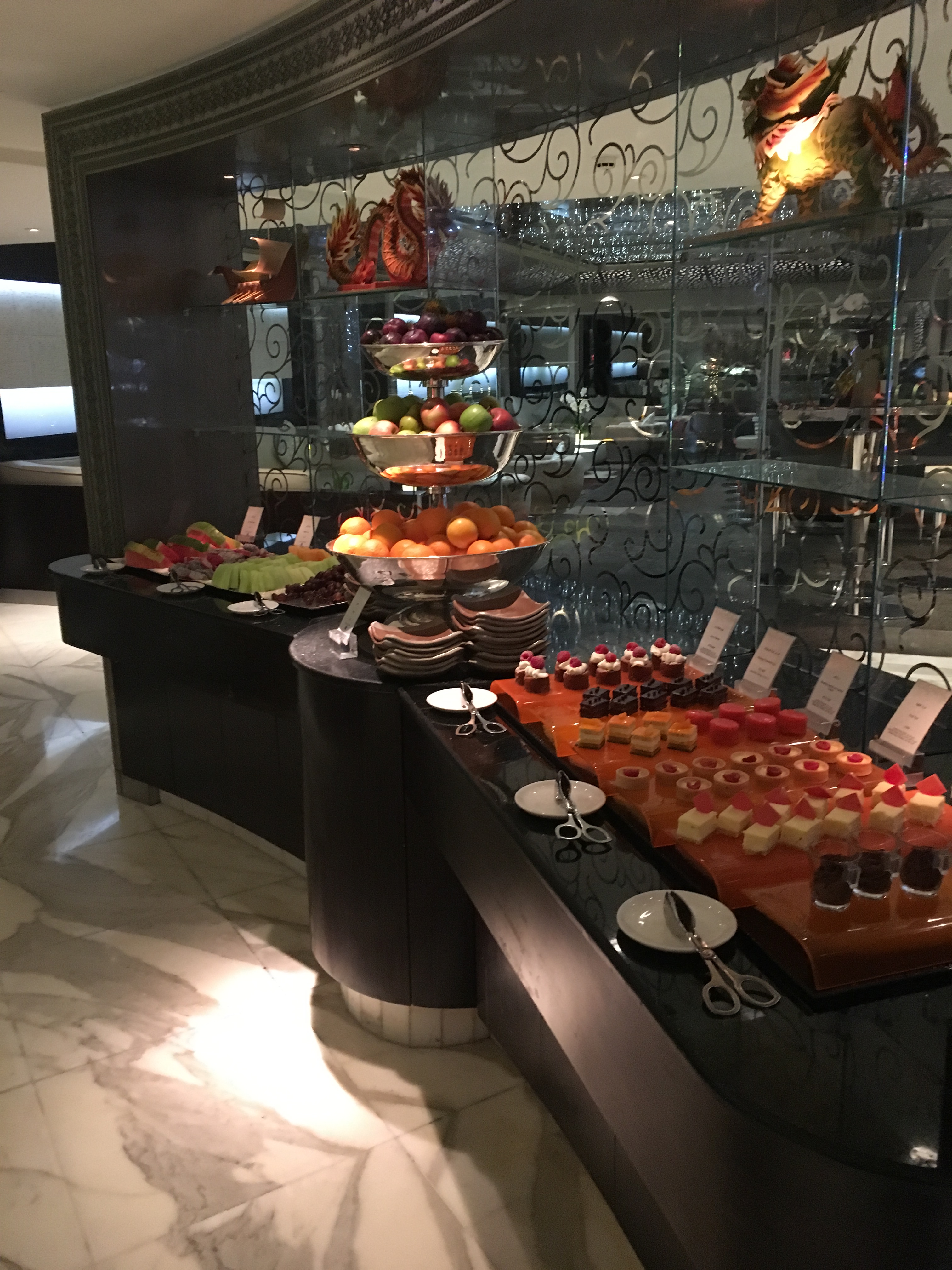 Selection of desserts to finish (don’t miss the ice cream!)

In terms of drinks we stuck to water but watch out for the bill. Two large bottles cost us AED 110 which we thought was on the steep side for water even in a 7 star hotel but there you go.

The Burj Al Arab is unique and is definitely a must have on the bucket list. If you can stretch to dinner I think Junsui does is a great choice for the quality of food (and quantity if you want it!). That saying I haven’t tried the other options, and there’s many, but Junsui definitely delivered in terms of a wonderful dinner and I’d definitely like to try it again (but I’ll probably need to save up for a bit first!)

The Guestbook comment: “Go for a special occasion for the wow factor combined with great food and even better service, and don’t forget to leave time to stroll around the hotel entrance lobby and check out that ceiling – it’s all part of the experience!”