Where is Matera and what’s it all about?

Matera, Basilicata is like nowhere I’ve ever been. We told our Italian friends we were visiting and we got many a concerned look. Matera hasn’t had the best past or reputation, with many families as recently as the 1950s living in caves with high levels of poverty. It really was an embarrassment to many Italians.

But things have changed, now a UNSECO World Heritage Site, and soon to be the European Capital of Culture in 2019. Things are certainly looking up for Matera. From my visit, I can see why. The famous Sassi, which is made up of cave dwellings and rock churches, is something from a different world dating back 7000 years ago. I visited in November, and if anything the moody grey skies and rain added to the experience.  I felt a million miles from the Italy I’d flown into down the road in Bari. (There’s not many times that I’d be ok with rain on holiday). 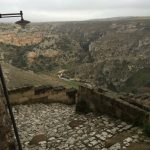 Matera- View from the hotel room 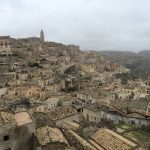 Sleeping in the caves at Sextantio – Le Grotto della Civita

Not only was I seeing the incredible landscape and scenery of Matera, I was also getting to stay in one of the caves. Sextantio – Le Grotte della Civita – the brainchild of Daniele Kihlgren (a hotelier and philanthropist). He has transformed a derelict area, littered with evidence of illicit drug use and discarded rubbish, into 18 beautiful cave dwellings. At the heart of the project was the need to respect the history of the site. With careful restoration, and a meticulous level of detail, he’s done this perfectly. The caves have certainly become a part of the unique surroundings rather than changing them.

We stayed in cave 8, but I imagine all rooms are very special. On arrival we were given the biggest and oldest key and directed to a huge wooden door cave entrance. It’s worth adding that there was also a very small window with bars on it(!). The trepidation from the outside was soon dispelled though. Inside was incredible and will go down as the most unusual place I’ve ever stayed in. This is possibly the only place with no lights (intentionally), yet WIFI and a hairdryer included.

The lack of lights surprised me (which was probably pretty naive), but that’s why it’s magical. Candles provide enough light for it to feel authentic, but also practical enough to be able to look in the mirror and check I didn’t have mascara half way across my face before leaving each morning.

To be fair I don’t think any description would do this place justice. With this in mind I’m going to let the pictures do the talking. It’s worth adding that breakfast is included which is served in the converted rock church. Breakfast is traditional of the region and was taken in front of a roaring fire – again another win for a November trip! (Ps. sorry about the breakfast picture, I got carried away and pretty much finished it before taking them!). 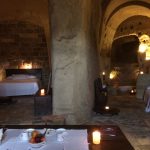 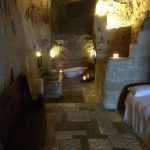 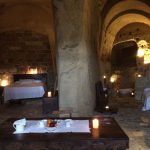 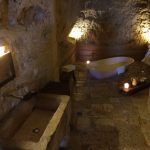 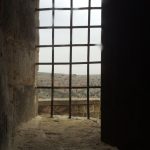 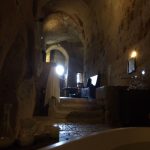 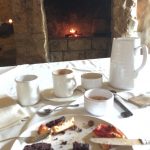 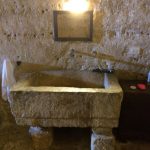 How do I get to Matera?

Getting to Matera isn’t too difficult. We flew with Ryanair on the Thursday night flight arriving into Bari late evening. On arrival we chose to stay in Bari in an Airbnb for the night. (A cosy upstairs bedroom of an old Italian lady). As we were going all out on the hotel so really saved on transport. We got the train from Bari airport to the centre and arrived in time for dinner. The next day we got a train direct to Matera and passed through wonderful countryside. (Note that the train splits in two so check you’re in the right part!)

Word of warning on arriving in Matera – I would not recommend walking from the station to the hotel like we did. To say Matera is a hilly maze is an understatement. On the way back we mixed it up and got the bus rather than the train which went direct to the airport which was also great.

How many days/nights do you need in Matera?

We were out of holiday so could only do a long weekend. This is fine if you are happy to get out and about and explore each day. If I had extra days I would definitely consider exploring other areas too. I’d love to go back so will be doing further research but initial suggestions would be pairing it with some of the towns in Puglia next door. Ostuni, Alberobello and Lecce are on my list. This area of Italy might not get the same level of attention or publicity as your Amalfi coast, the Lakes, and the cities of Rome and Venice, but it has so much to offer.

When should I go to Matera?

Controversial for some maybe, but I actually really enjoyed November and think the grey weather added to the mood and spectacular scenery. It’s worth noting though that some restaurants were closed especially at lunch time. Some were event closed for the whole month! We found enough places to keep us happy though and this time of year meant quieter streets and sights. It also meant cheaper hotel rates which is a bonus. You might want to consider a different month if you want more options however.

So all in all I can highly recommend a trip to this very different part of Italy. Here’s a quick summary to help you decide if Matera is right for you…

You’ll love Matera if you…

The Guestbook’s comment: “Spectacular scenery and a one off destination that should be on your list to see a completely different Italy. A transformation of fortunes and rightly so, but being there does make you reflect on the realities of day to day life for families pre 1950s.”

Want to see more of Italy and discover a new area? How about the Northern town of Viareggio? See Chris’s guide here for more on this destination.